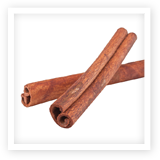 Cinnamon is one of the oldest aromatics which has also enjoyed an illustrious history as a spice and medicine. In the Old Testament of the Bible, the Lord spoke to Moses and gave him the formula for a holy anointing oil containing myrrh, cinnamon, cassia, calamus, and olive oil.

As early as 1500 B.C. Arabs were controlling the distribution of two types of cinnamon to Babylon, Egypt and Rome, and were able to monopolize this lucrative trade by keeping their sources a closely guarded secret. About 1800 years later, the Romans began making expeditions across the Indian Ocean to source cinnamon and other precious commodities themselves, thereby revealing the secret of its origin.