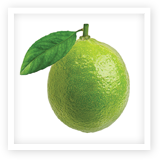 Limes were first grown on a large scale in southern Iraq and Persia. The fruit was then grown commercially for the first time in what is today southern Iraq.

To prevent scurvy during the 19th century, British sailors were issued a daily allowance of citrus, initially lemons but later changed to lime. The use of citrus was initially a closely guarded military secret, as scurvy was a common scourge of various national navies, and the ability to remain at sea for lengthy periods without contracting the disorder was a huge benefit for the military.