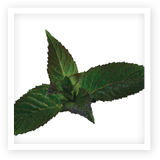 Peppermint was first described in 1753 by Carl Linnaeus from specimens that had been collected in England; he treated it as a species, but it is now universally agreed to be a hybrid. Peppermint is a hybrid mint, a cross between watermint and spearmint.

Pliny the elder, 79 A.D., an ancient Roman author, natural philosopher and naval and military commander wrote Naturalis Historia. It tells us that the Greeks and Romans crowned themselves with peppermint at their feasts and adorned their tables with its sprays. Their cooks also flavored their sauces and their wines with its essence.